The Havering Indoor league is now defunct so the committee having been working on ensuring we still play competitive indoor cricket during the winter.

In the New year, it is likely we will be invited to play in the South Essex Indoor Cricket League, which will be played at the Gateway Academy, near Grays, on a Monday night. We will also be looking to  get a youth team playing in the South Essex indoor league.

Also in the New year, to supplement this, Jono will be organising on a monthly basis at Campion School Sports Hall a 3 team inter club 6 a side round robin series of matches. This will ensure everyone that wishes to play indoor cricket can do so.

This meeting took place at the clubhouse on 9th November and its welcome to Joe Attfield as the new under 15s manager (assisted by Charlie and Abdal), Darren Wallace who will be going on a coach support worker course and Kelly Wallace who will be attending a Club Welfare Officer course. Sharon Adkins will be standing down from the Welfare Officer role and we all wish to thank her for the countless number of hours of voluntary service that Sharon has put into Rainham Cricket Club.

Jay and Warren will lead the under 13s this year and Peter and Paul Newman will be taking charge of the under 11s.

Full notes from the meeting attached.

Don’t forget, bring along family and friends to the Christmas bash down the clubhouse from 7pm until late. If anyone has any Christmas decorations they no longer require, then please contact Paul Newman on 07841-039238.

Sunday 30th April 2017 – Six a Side and Table Tennis Competition

The traditional first of our social days for 2017 will be a new format for the inter club 6 a side tournament. This season we have invited Goresbrook, Orsett and Belhus to take part in a 6 a side 4 team tournament. Also, we will be inviting the same clubs to participate in an under 11s kwik cricket tournament.

The table tennis tournament will also continue as in previous years.

It is vital that we have enough volunteers on the day to do duties such as umpiring, scoring, BBQ, the bar, teas and generally organise.

Winter nets start on Thursday 17th November at Campion School Sports Hall, the cost wil be £3 per session to pay for the hire of the hall.

Seniors start from 8pm to 9pm

This will be every Thursday right right through to Thursday 30th March 2017, except for a short break from 8th December and then we start up again on Thursday 29th December.

We’ll try and mix things up a bit this year for a bit of variety.

We had a good season last year, so let’s now build on it and put in the work to make next season even better.

We will be holding a Christmas party down the club on Saturday 17th December from 7pm till late.

Biren will be on the decks and our new social secretary, Paul Newman, will be organising a raffle.

If anyone has any Christmas decorations they no longer require, could they please contact Paul on  07841-039238 and they will be used down the club.

Please feel free to bring along family and friends as it promises to be a good night. 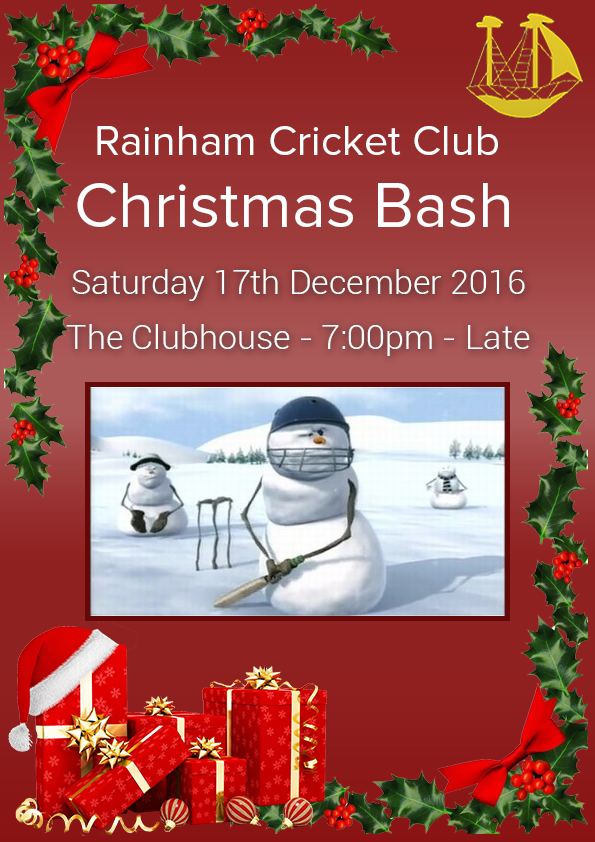